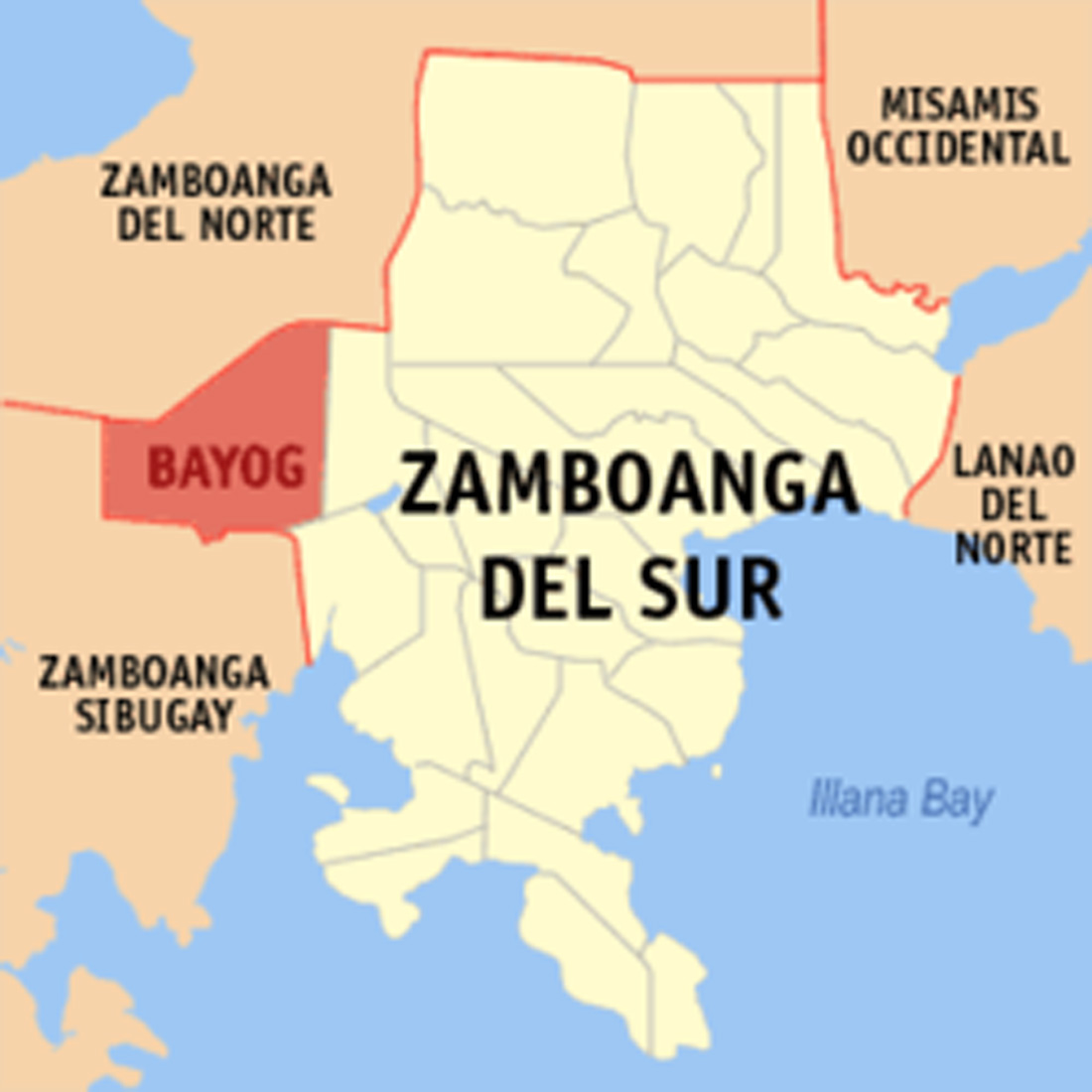 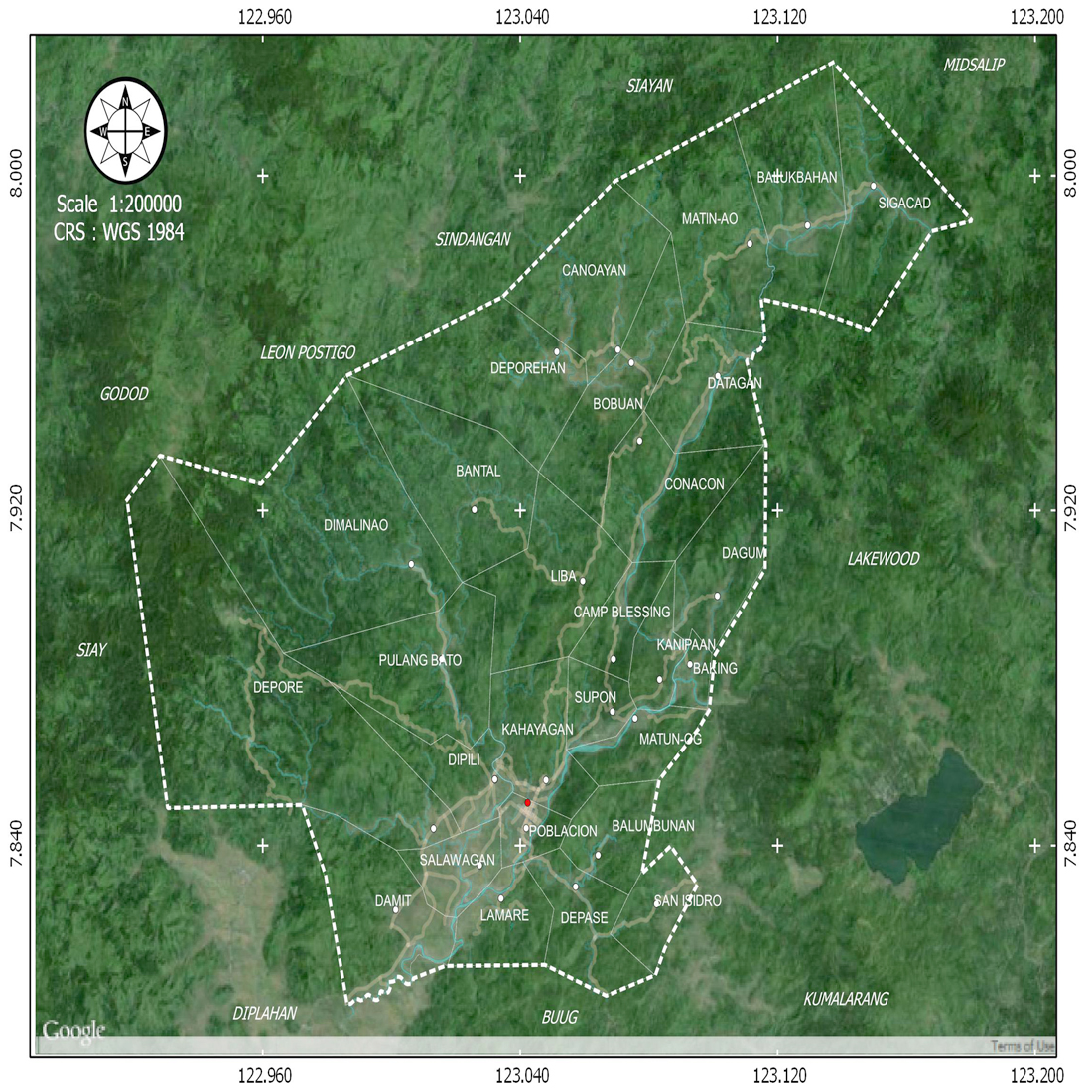 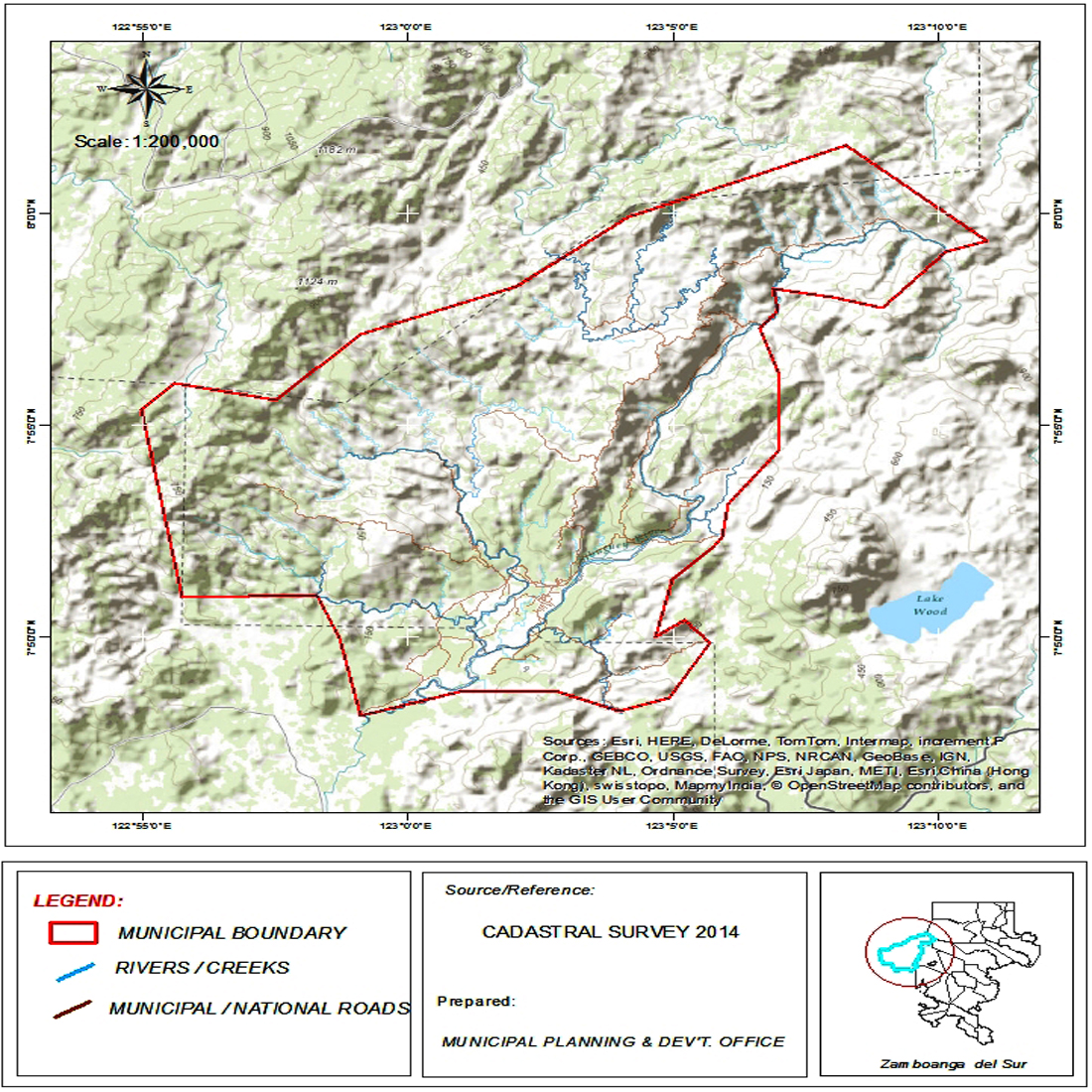 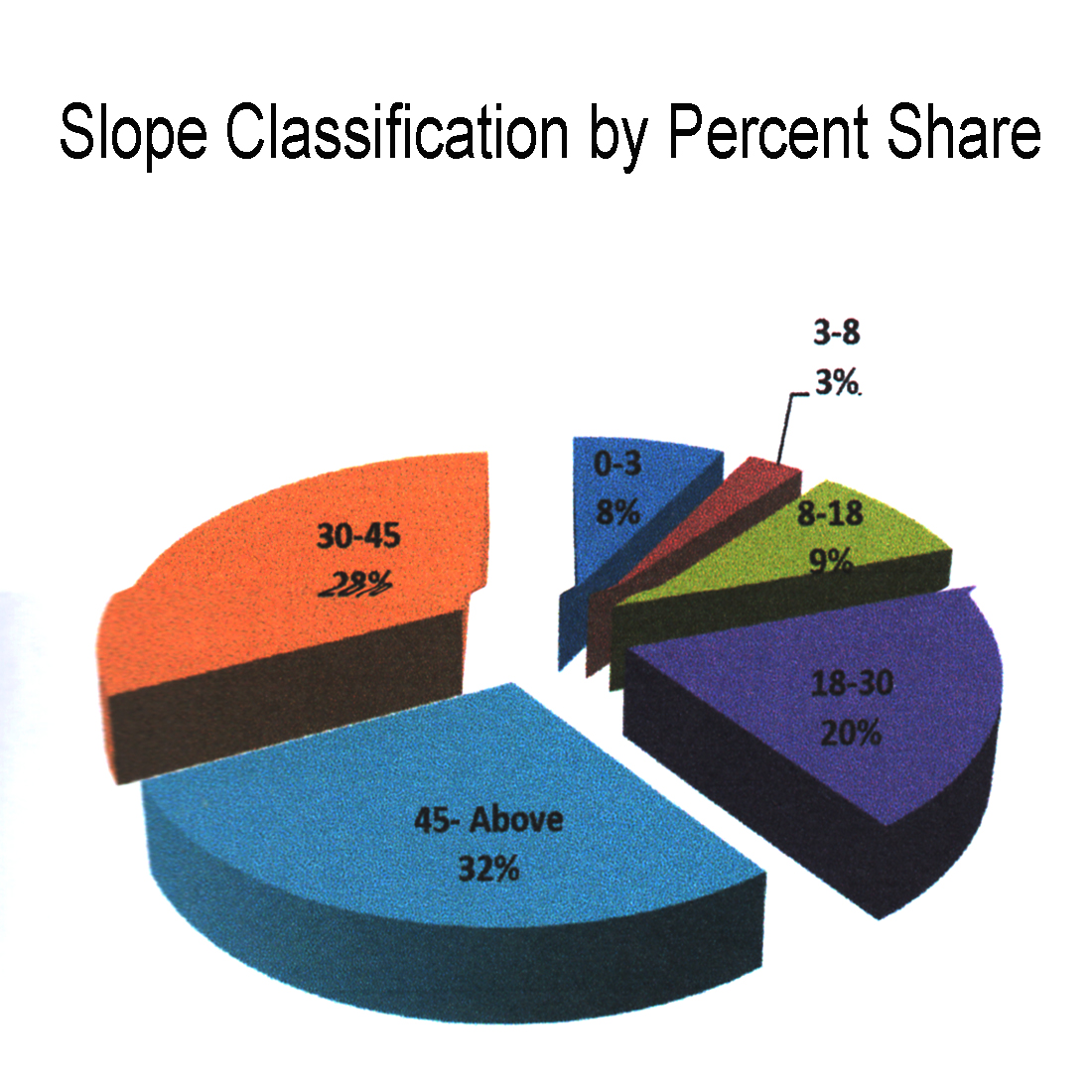 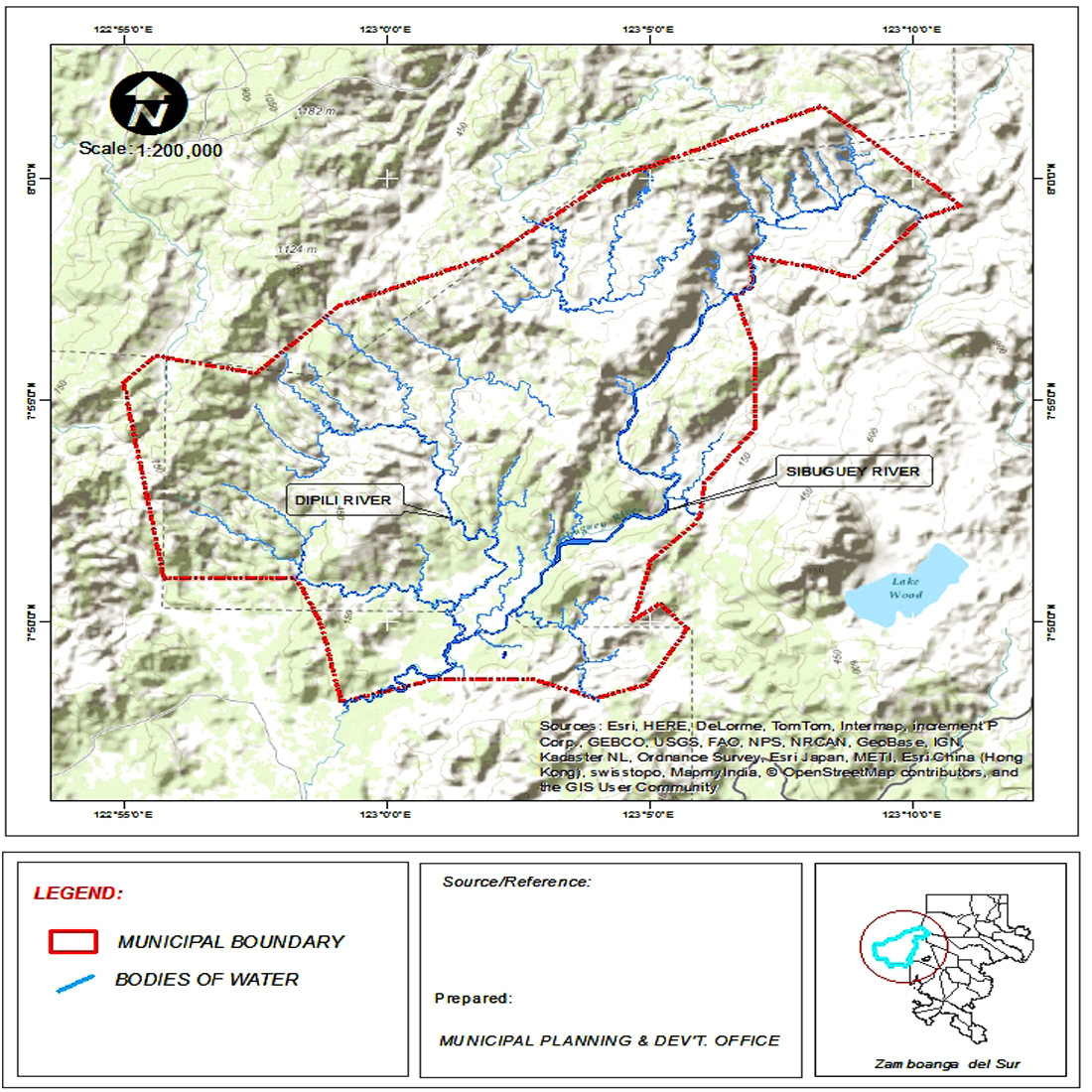 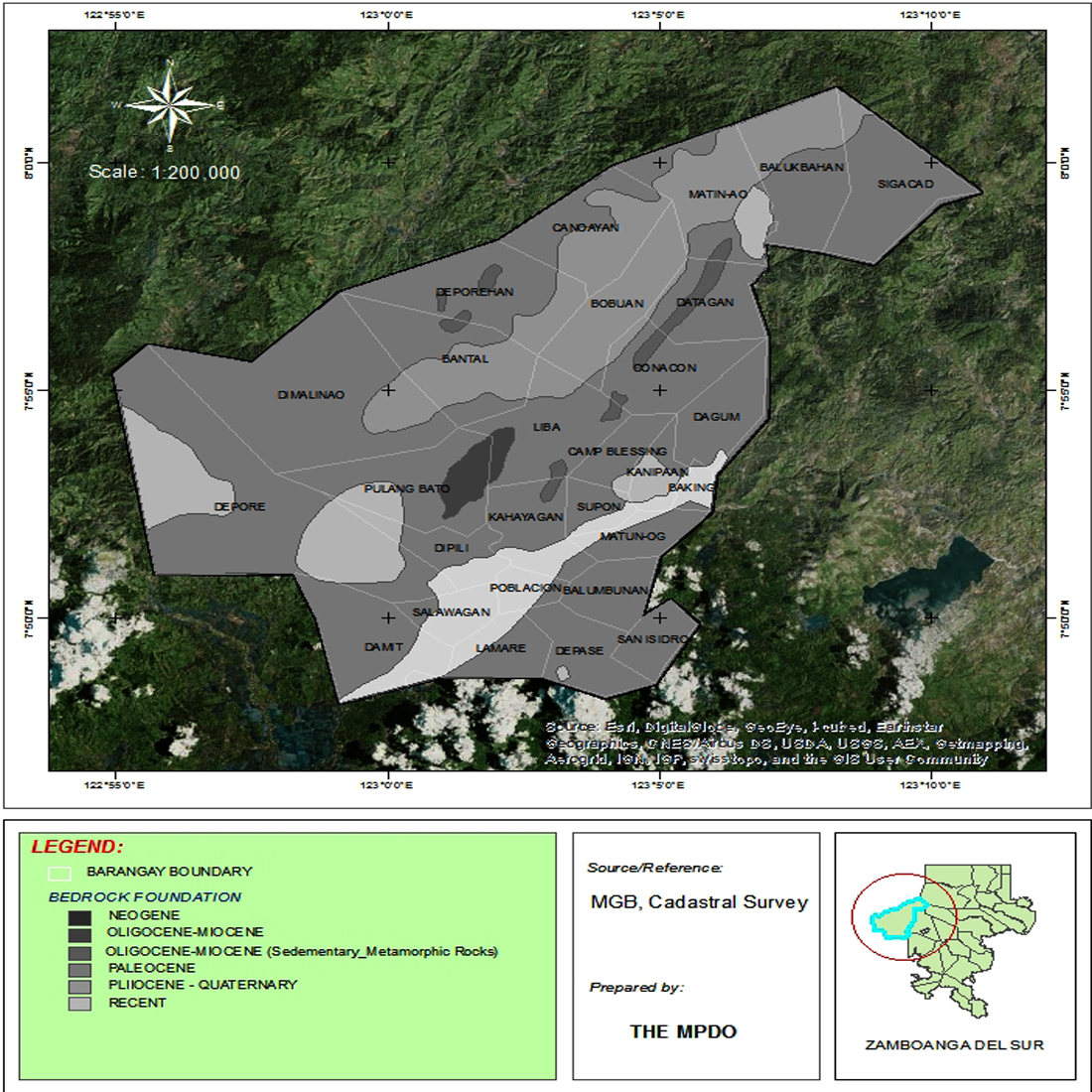 Based on the Cadastral Survey conducted by the Department of Environment and Natural Resources (DENR), the municipality has a total land area of 35,463.643 hectares distributed among 28 barangays. This number represents approximately five percent (5%) of the total land area of the Province of Zamboanga del Sur pegged at 735,769 hectares. (Source: CLUP 2014-2023 - Office of the MPDC)

The Municipality of Bayog is generally hilly and mountainous. Eighty percent (80%) of the total land area is mountainous and approximately twenty percent (20%) of the total land area is suited for agricultural purposes and urban development. Only eight percent (8%) flat and or plain area is best suited for any type of development and twelve percent (12%) of which are medium slopes which can be suited for agricultural development and low density dwelling. (Source: CLUP 2014-2023 - Office of the MPDC)

The climate condition of the municipality is of 4th type per record of the Department of Agriculture - Western Mindanao Integrated Agricultural Research Center (DA-WESMIARC). This climate condition is common in all the Zamboanga del Sur areas. Usually, the dry season is from the month of January to April with occasional rains. The mean annual rainfall amount is pegged at 2,351.20mm while the month of September has 474.2mm, and February has 47.7 mm was recorded the highest and lowest rainfall respectively. Data shows that the mean annual temperature of the area is pegged at 31.149 degrees centigrade with the month of March being the hottest period of the year with 32.25 degrees centigrade highest recorded temperature. The month of September was recorded as the coldest period of the year with 16.92 centigrade. (Source: CLUP 2014-2023 - Office of the MPDC)

Majority of the barangays are found in the area of medium to high slopes and only barangays Poblacion, Dipili, Depore, Salawagan and Damit can be located in flat and or plain area. In a capsule, the municipality is generally mountainous with average slope of 12-30 degrees and varying from 0-80 degrees distributed throughout the municipality's land area. (Source: CLUP 2014-2023 - Office of the MPDC)

The municipality has two (2) big rivers and a lot of tributary creeks where significant number of sand, gravel and other quarry resources are available with class A classification as classified by the District Engineers Office of the Department of Works and Highways (DPWH). These two big rivers are the Sibuguey River and Dipili River. (Source: CLUP 2014-2023 - Office of the MPDC)

Records show that the soil of Bayog is classified into two types: San Miguel Silt Loam and the Alimodian Clay. The soil in the lowland areas is classified as belonging to the San Miguel Silt Loam which is best suited to the cultivation of lowland rice, corn, vegetables, legumes and other diversified crops. On the other hand, the soil in the upland areas is of the Alimodian type which is best suited for corn, rice, coffee, fruit trees and rubber. (Source: CLUP 2014-2023 - Office of the MPDC)

The municipality is outside the typhoon belt and like the rest of the municipalities in the province, it has not experienced drought nor had badly hit by typhoon. Its hydrologic features are characterized by the presence of springs, rivers, creeks, waterfalls and underground waters found in various locations in the municipality. Bayog has no known fault lines and its bedrock foundation is composed of Neogene, Oligocene-Miocene, Paleocene, Pliiocene-Quaternary and Recent. (Source: CLUP 2014-2023 - Office of the MPDC) 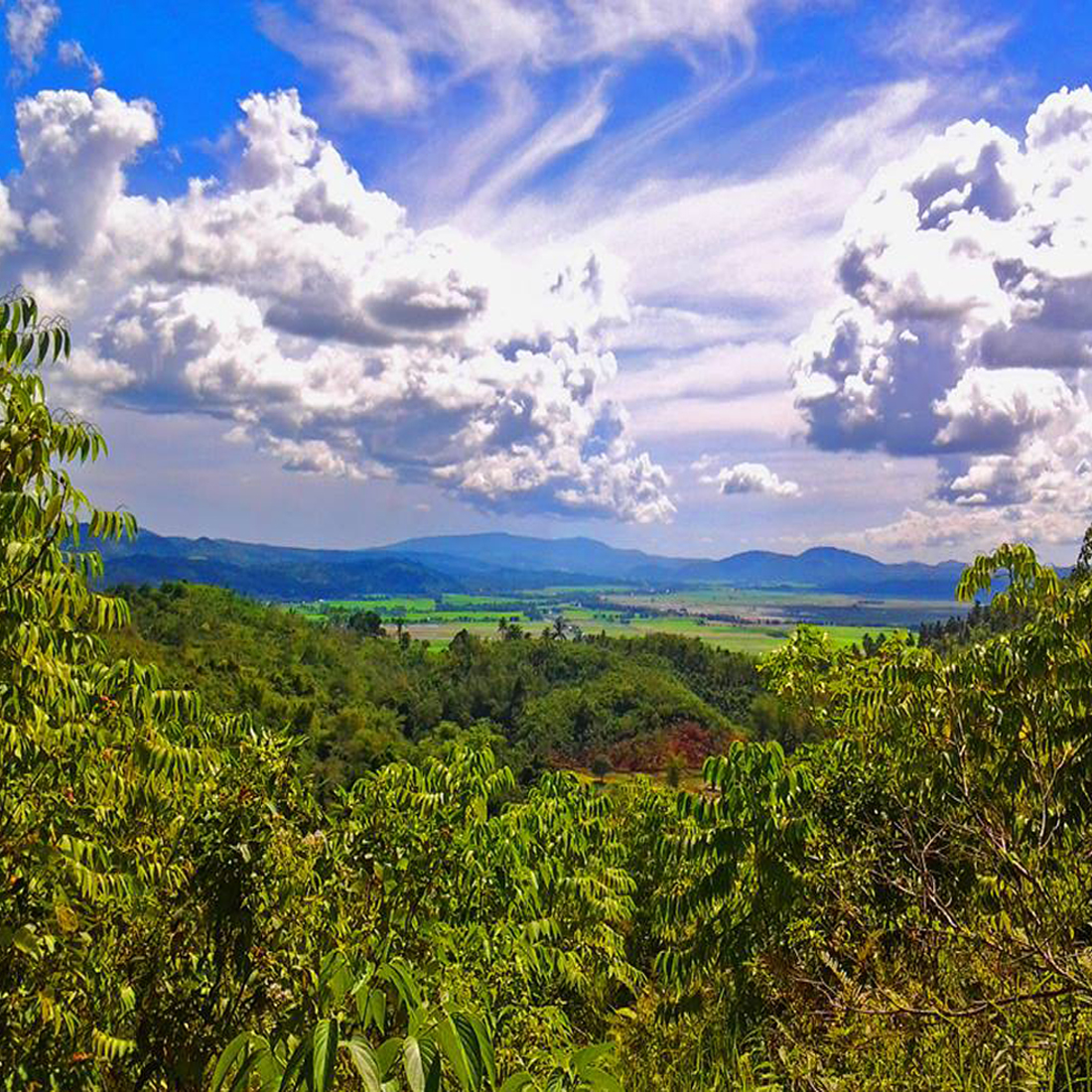 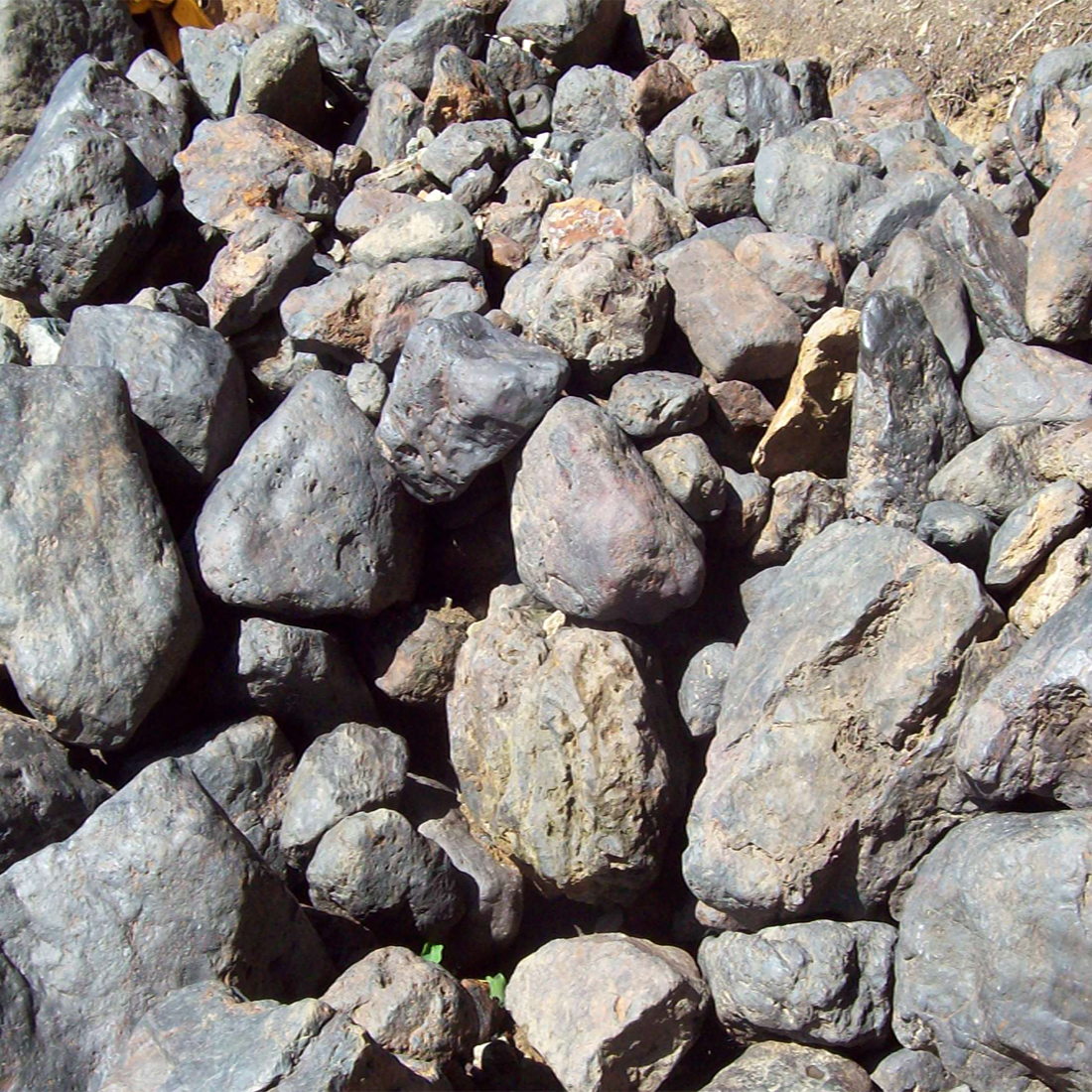 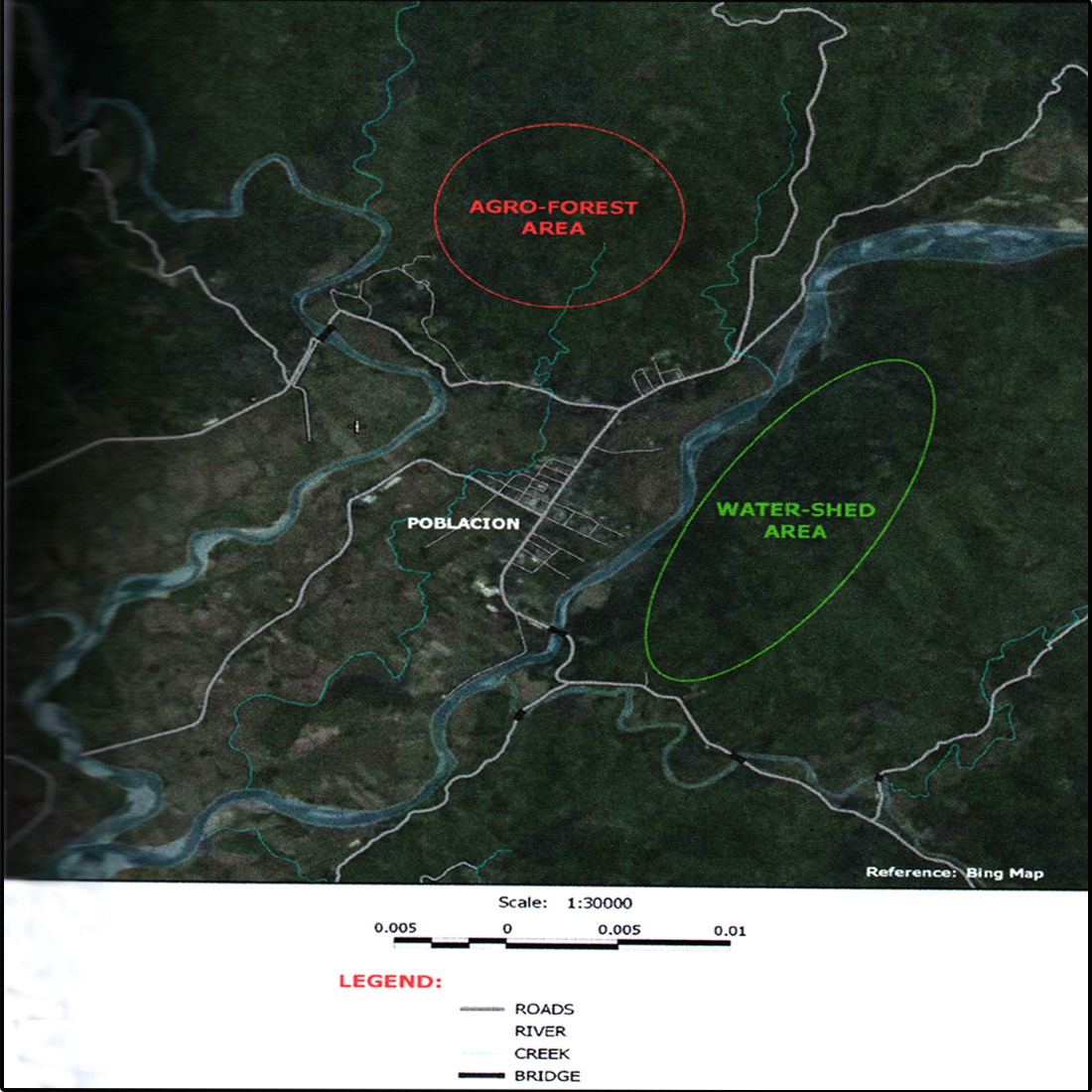 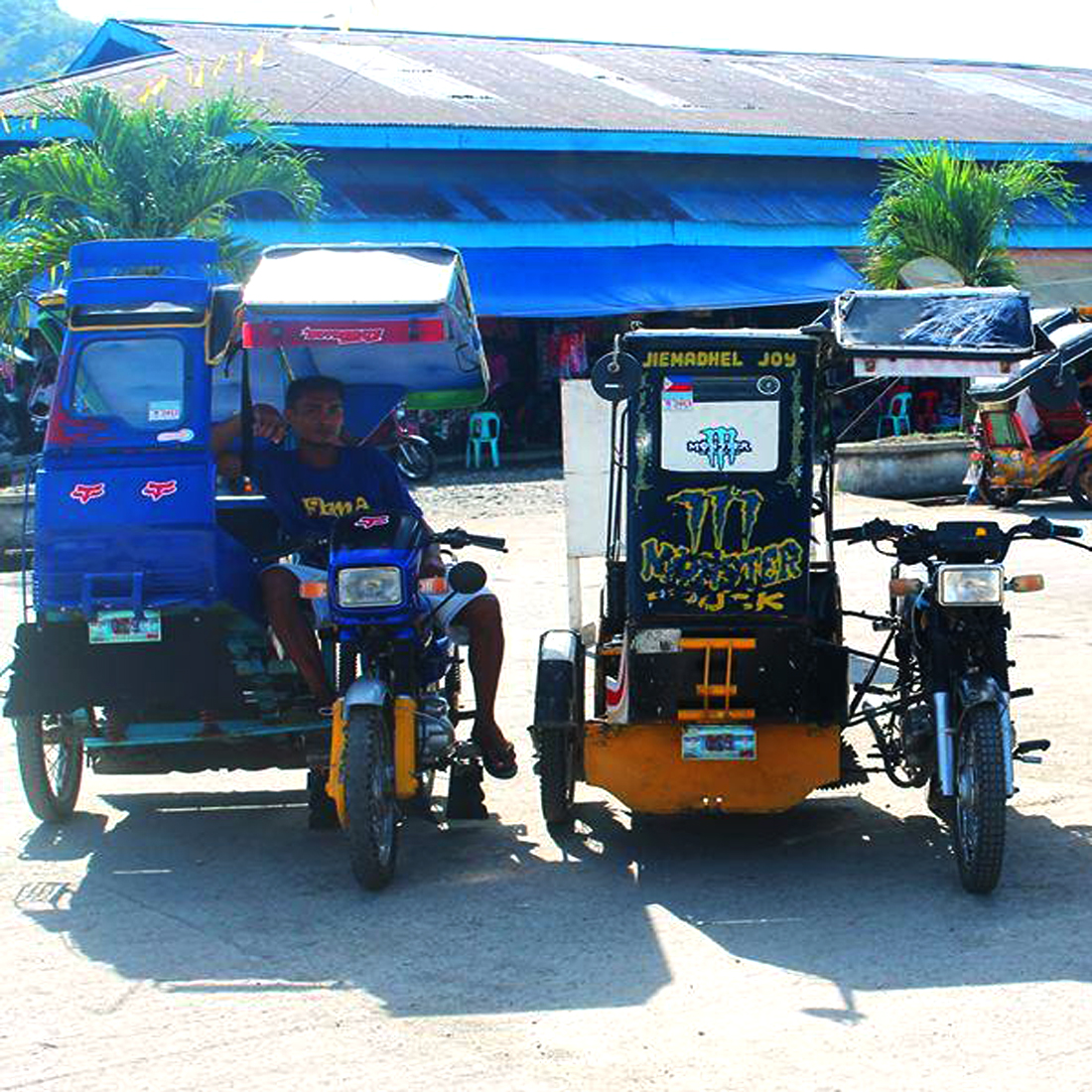 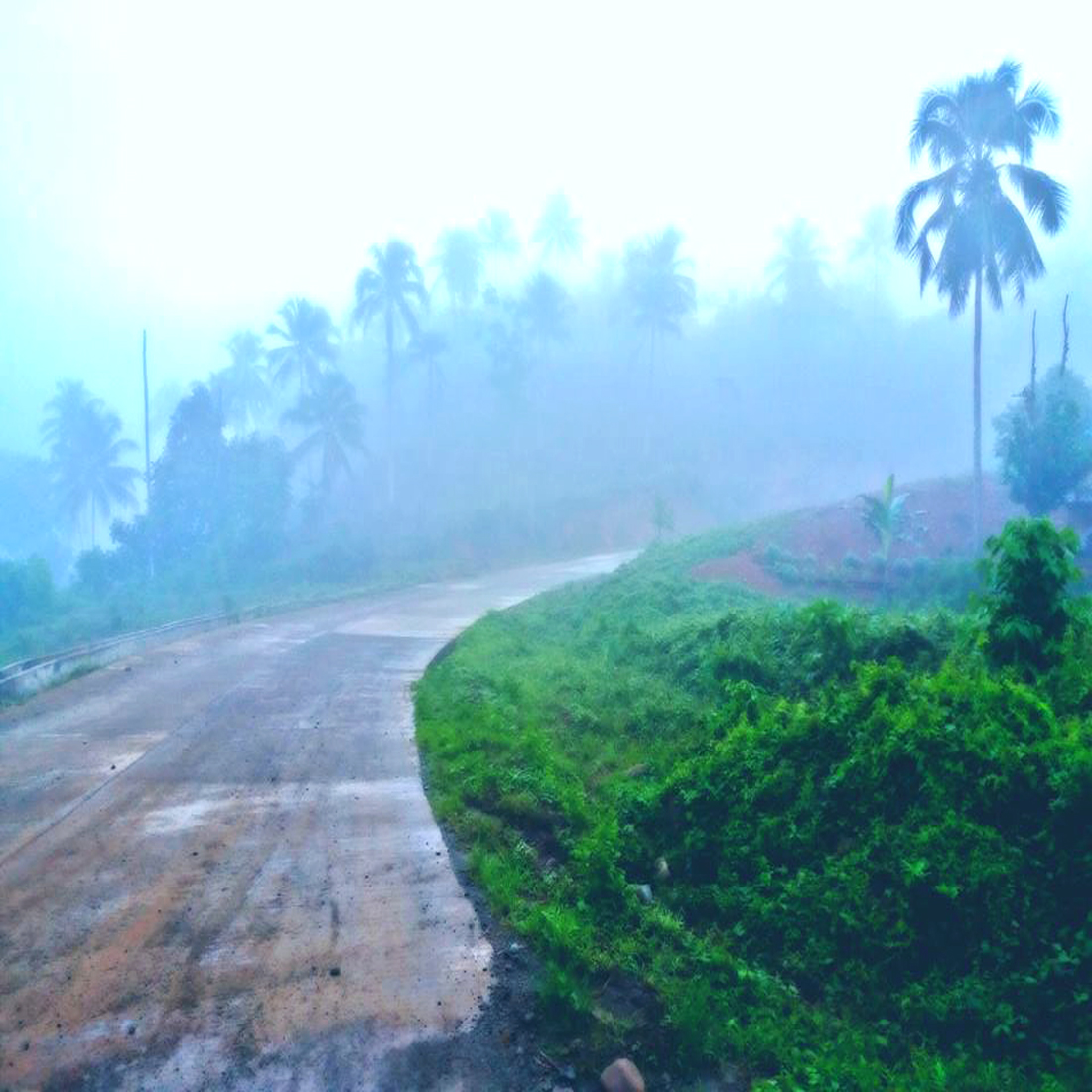 Bayog has an aggregate total forest land of 33,006.422 hectares. The Westmin Forest Productions, Inc. with TLA No. 103-3 that expired on 2004 has a logging concession in the municipality but its logging operation was suspended in 1995. Rattan and wood industries have a promising future considering the abundance of raw materials in the area like rattan poles and commercial timber.

The municipality still has a substantial reserve of primary metals like iron, copper, manganese and chromite. In 1959, Samar Mining Company, (SAMICO) started its ore mining operation at barangays Bobuan, Datagan, Liba, Conacon, Balukbahan and Kahayagan until 1967, when it decided to close its mining operation due to labor management conflict. Quantitative estimates over the remaining mineral deposit of iron ores in the aforementioned barangays is not available, however it is estimated that vast deposits still lie within the area. Gold, silver, copper, manganese and chromite are also found in barangays Depore, Deporehan, Pulangbato and San Isidro. In addition Bayog having two big bodies of rivers and lots of tributary creeks also has fourteen (14) sand and gravel concessionaries operating in town.

One of the most notable achievements for the Municipality of Bayog is the development introduced at the Glupa Gulian Agro-Tourism Ecological Park at barangay Kahayagan. Aside from the infrastructures implemented within the area is the conduct of massive tree planting activities in coordination with the National Greening Program, various institutions and religious sectors. An estimated 90 hectares of land were thoroughly planted with rubber seedlings. The area is also the proposed site for Agro-Forestry Development Project requested by the municipality through Bottom-Up-Budgeting (BuB) Program to be implemented by the Department of Environment and Natural Resources. Another conservation project is the Watershed Rehabilitation along the Sibuguey River.

With reference from the Permits and Licenses Division, Office of the Municipal Administrator, currently there are 134 registered tricycles, 107 registered habal-habal and 76 registered trisikads. And per record from the General Services Officer (GSO), the Municipal Government of Bayog as of this writing owns 2 fire trucks, 2 garbage trucks, 11 heavy equipment, 14 utility vehicles, 2 service vehicles, and 11 motorcycles, all of which are serviceable. 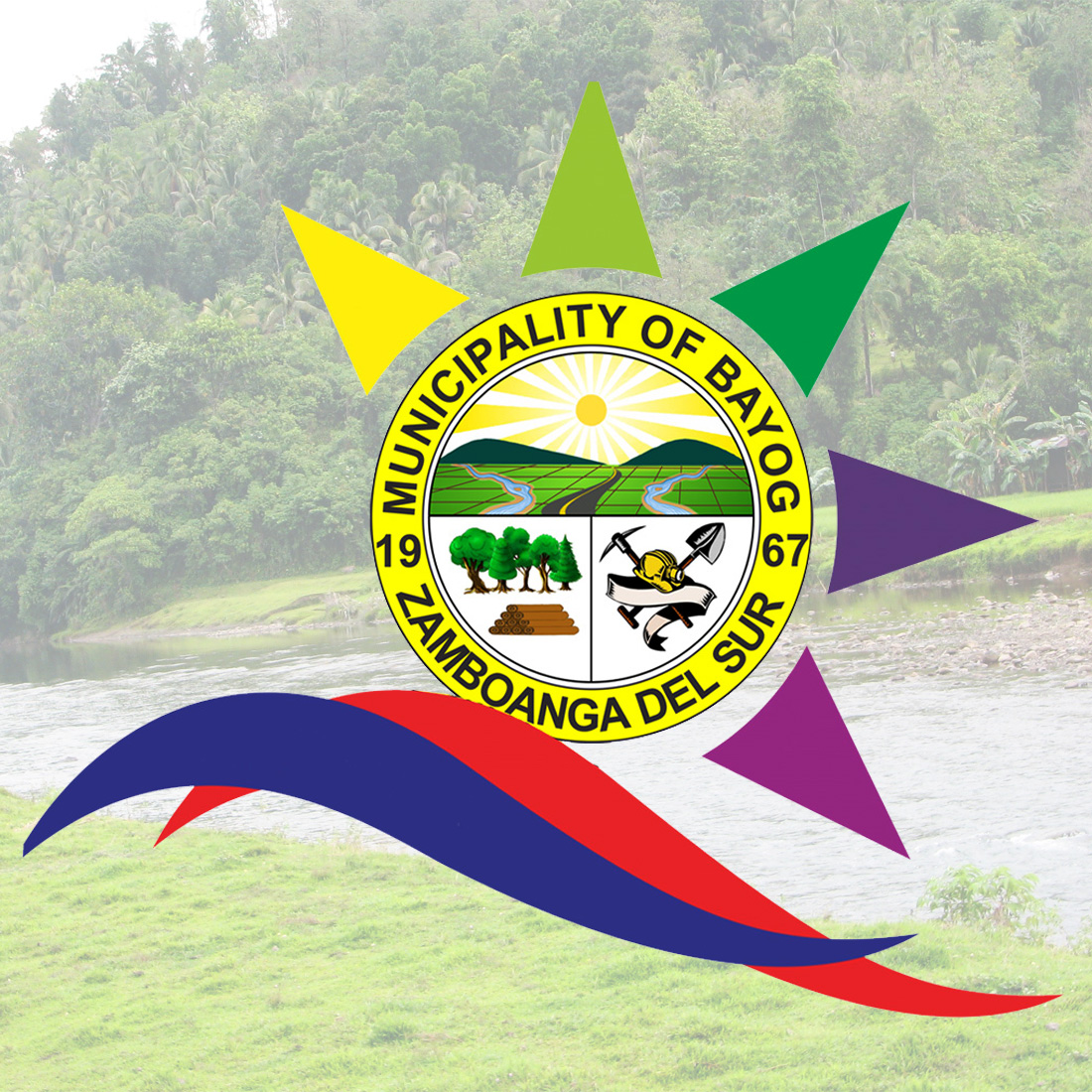 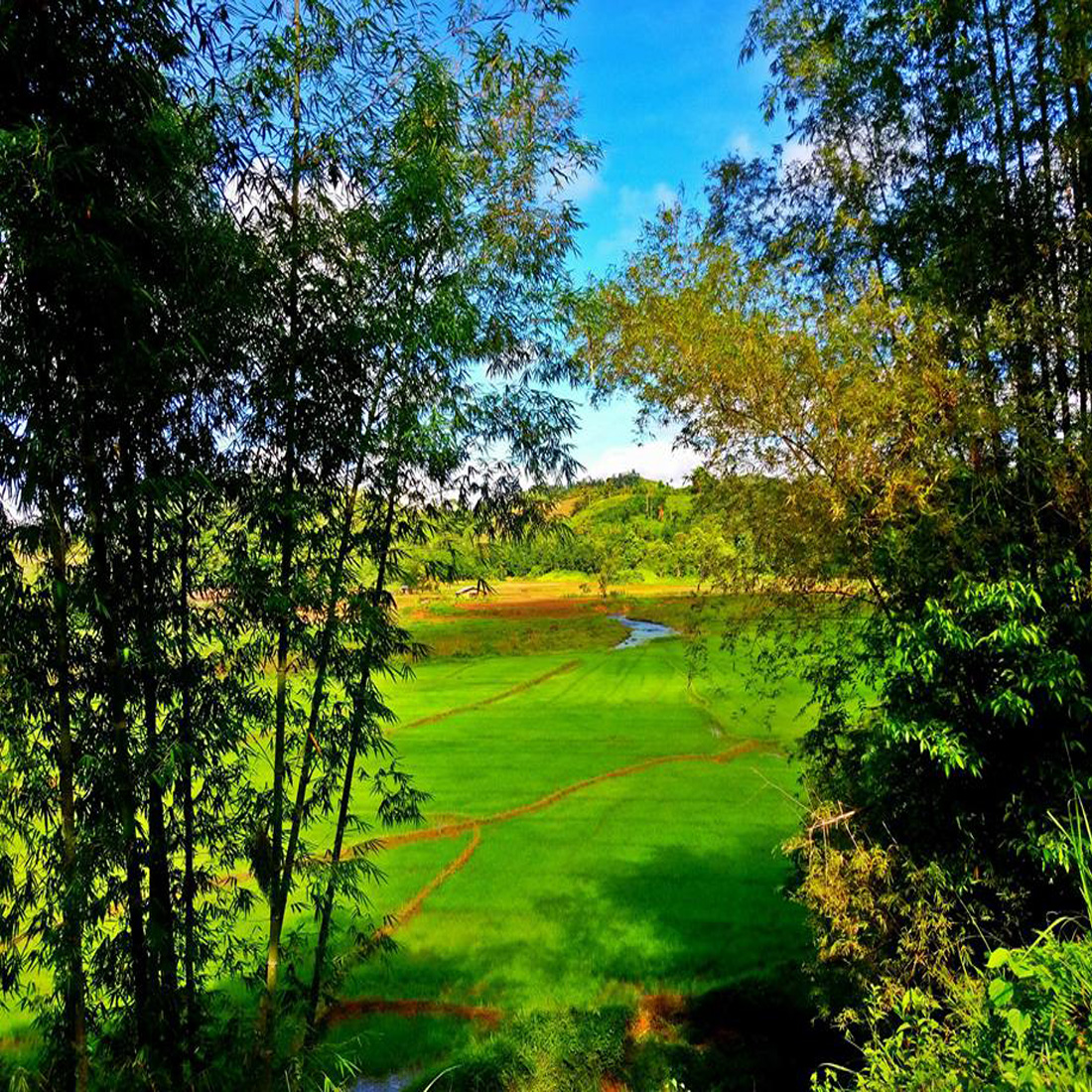 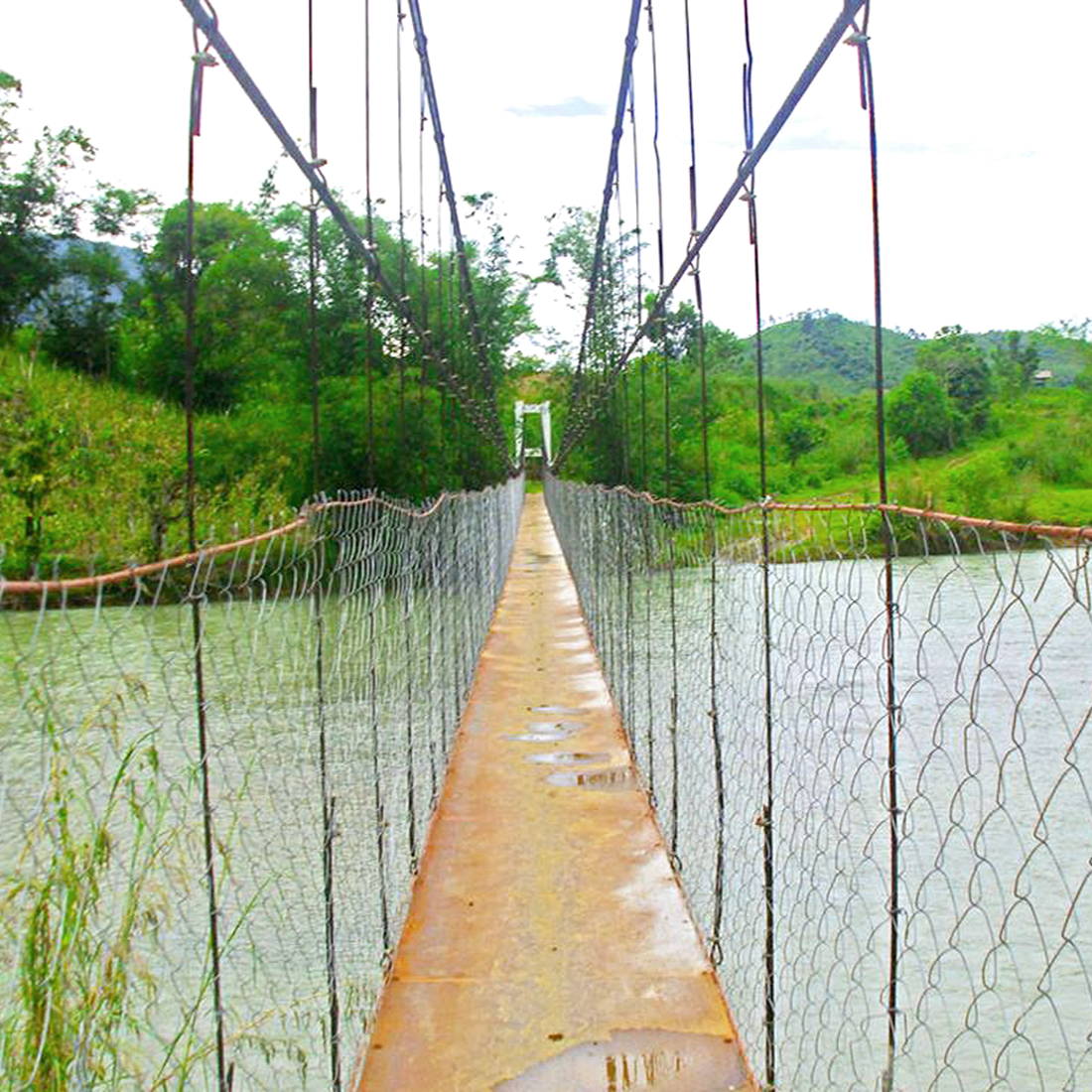 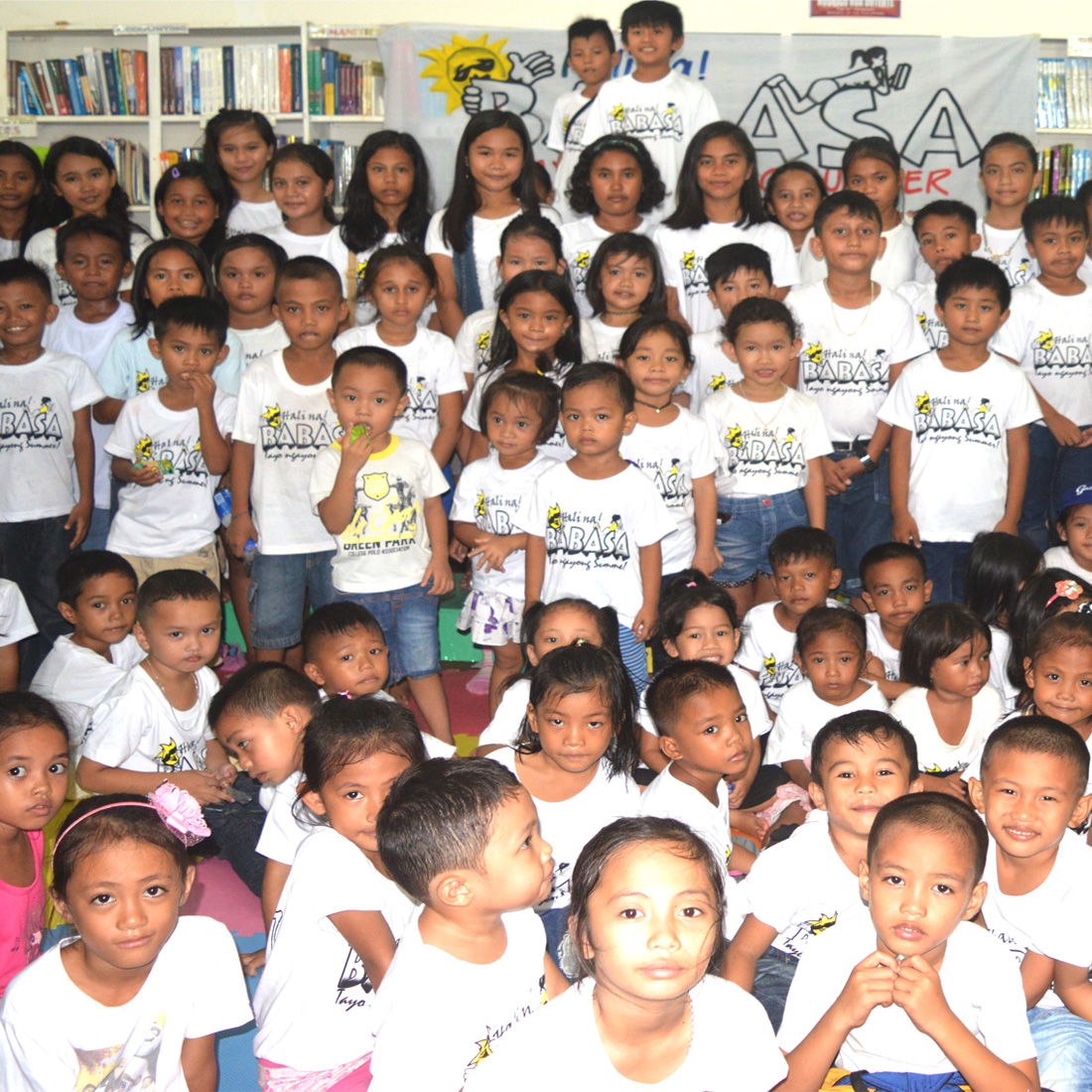 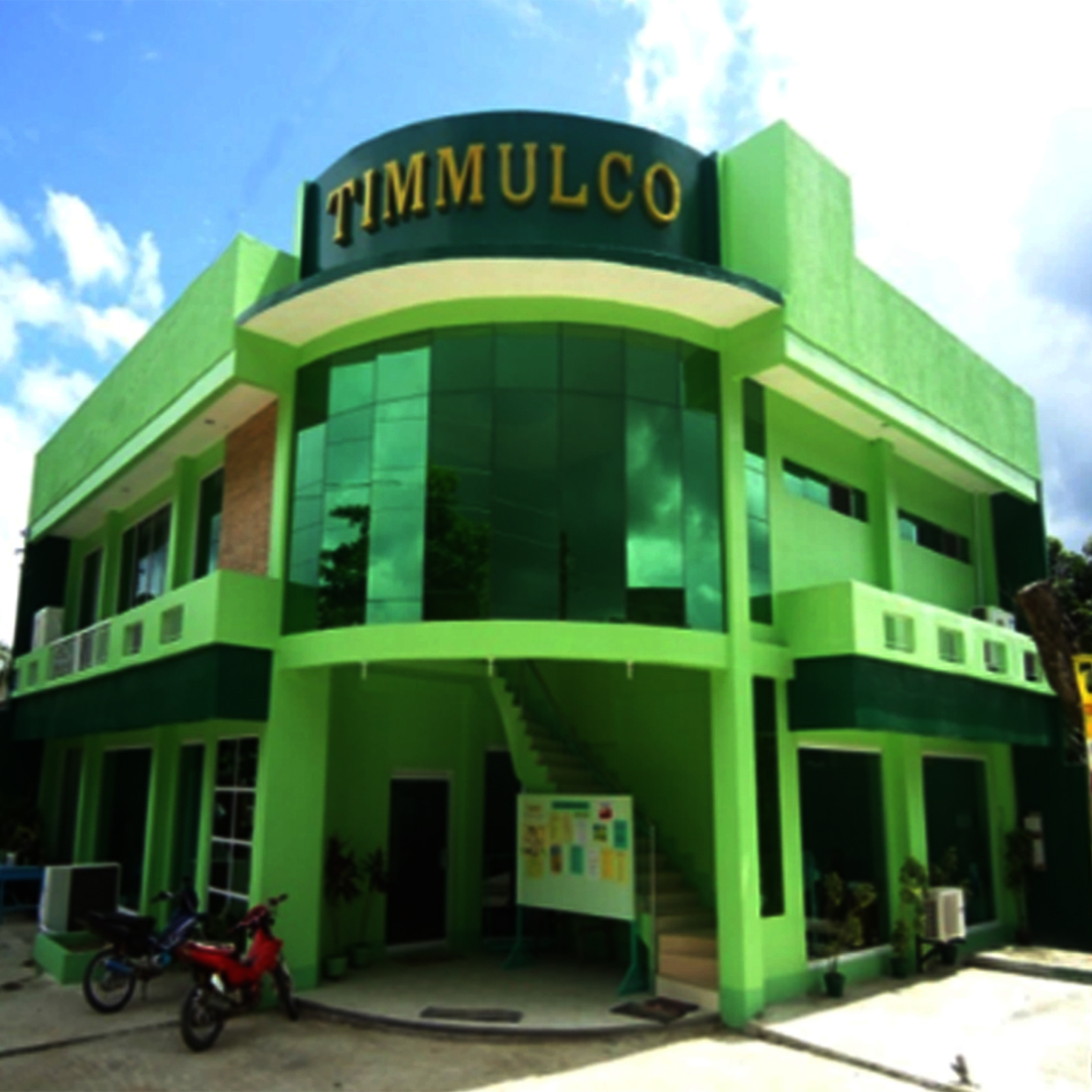 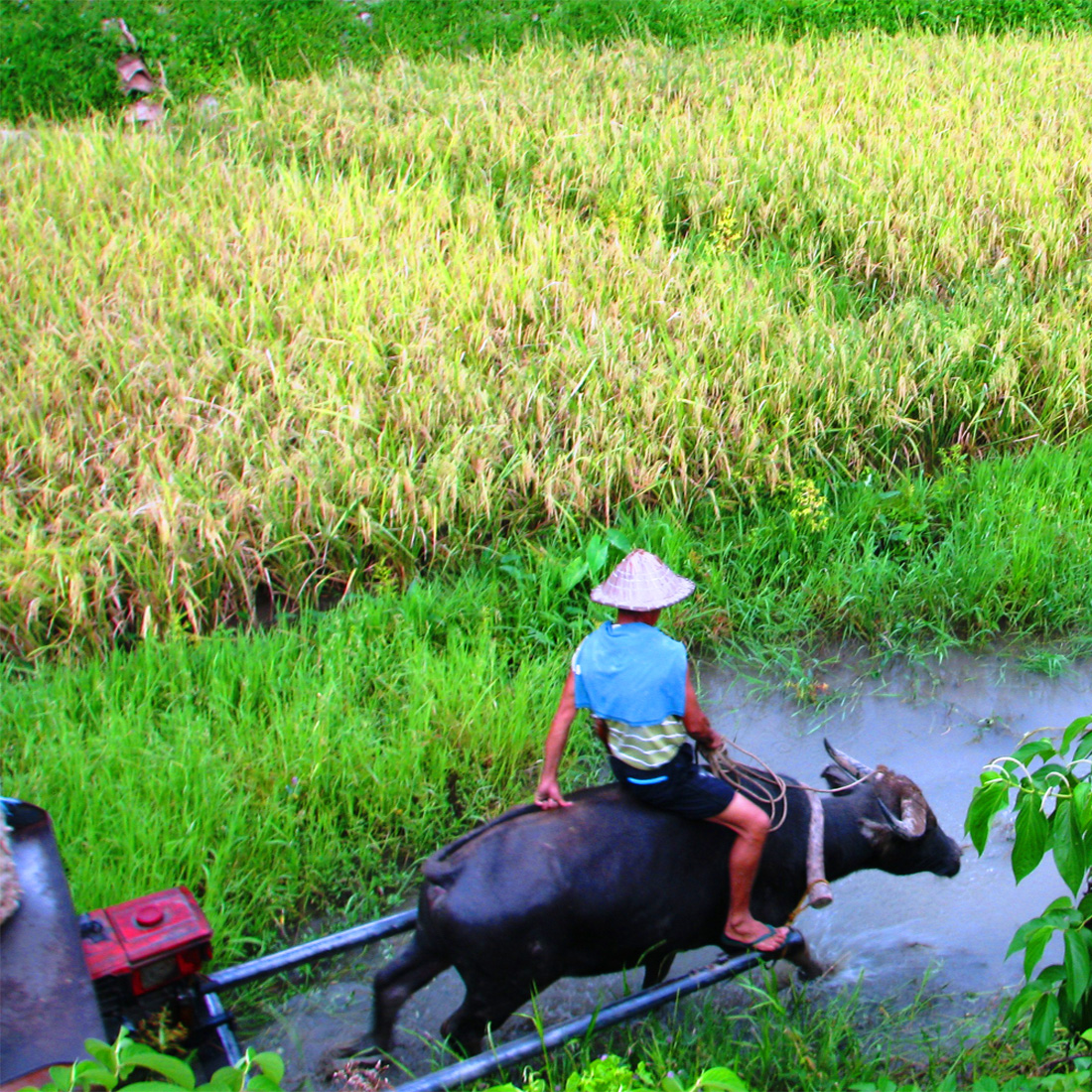 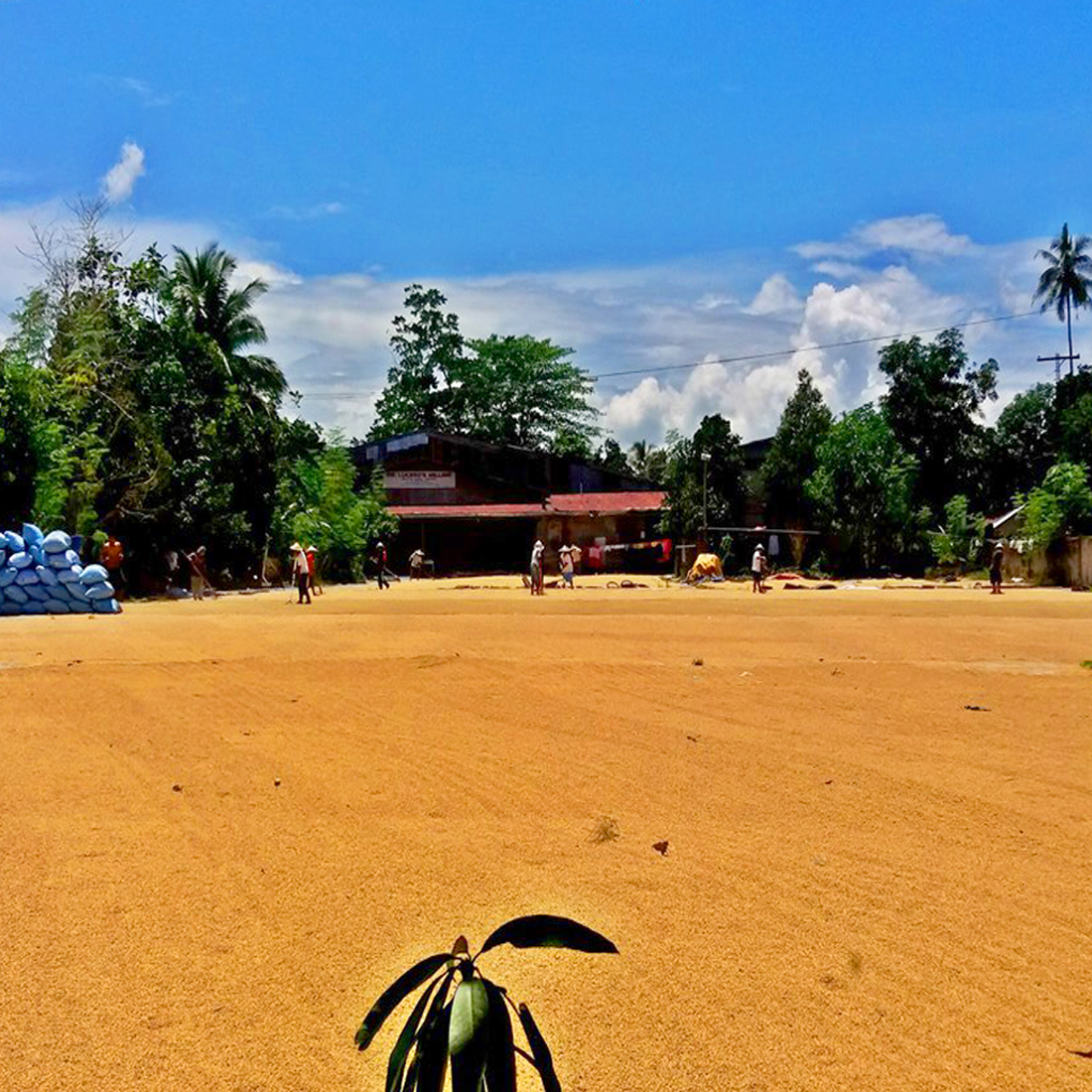 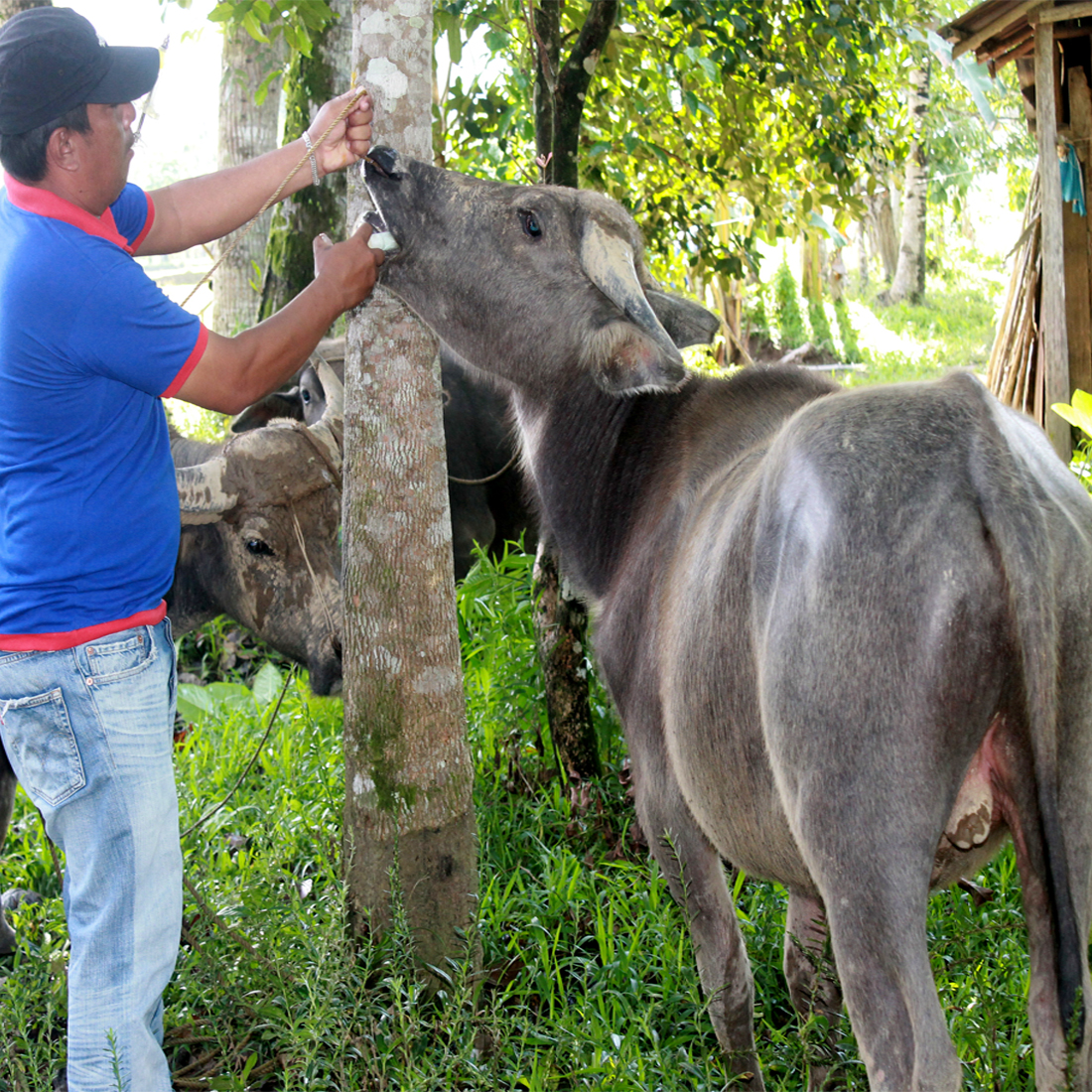 Bayog has one of the most bustling economies in the province, since it is one of the top revenue-producing municipalities in Zamboanga del Sur, with an annual income of P128,066,364.14 for the year 2016 per data from the Office of the Municipal Budget Officer which come mainly from business permits and licenses, operation of economic enterprises, and real property taxes. And per record from the Permits and Licenses Division, Office of the Municipal Administrator, there are 460 registered business establishments in the Municipality of Bayog to date.

There are also several cooperatives operating in the municipality. Most prominent of them are the Timbermines Multi-Purpose Cooperative (TIMMULCO) and AIM Coop which also contribute to the town’s overall income. Two pawnshops have also started operations in  town – the MLhuillier  and the Palawan Pawnshop.

Since Bayog is mainly agricultural, more or less 15 rice and corn mills can be found in the municipality. In addition, their products are also traded with neighbouring cities such as Zamboanga and Pagadian, which is why Bayog has also been considered as the “Rice Granary of Region IX”. The people of the town rely mainly on crop raising and animal husbandry. Two dams can be found in the municipality, namely, the Sibuguey Irrigation Dam and the Dipili River Irrigation Dam, which are responsible for irrigating some 100 square kilometres of ricefields. These dams were erected during the late 1970s with support from the Philippine-Australian Development Project. The dams are now under the management of the National Irrigation Administration.

Bayog was once cited as the Livestock Center of the region because of the Western Mindanao Livestock Development Center (WESMILDEC) in Barangay Kahayagan, which is responsible for the improvement of livestock products in Zamboanga Peninsula through right breeding. However, the same is no longer operational. In the past, Bayog was also referred to as the Timbermines Country.

Mining and logging were once the major industries in Bayog by the operations of the Samar Mining Company on Iron Ore, and the El Salvador Timber Company (ELSATCO) and the Zamboanga del Sur Logging Company (ZASTIMCO). Accordingly gold deposits are concentrated at Barangay Depore while copper and lead could be mined in barangays Bubuan and Liba. Several companies have started explorations, i.e. Toronto Ventures Incorporated (TVI), Cebu Ore Mining Inc, Miki Trio Ore Mining Inc., and some small scale miners which have their own organization, the Monte de Oro Small Scale Mining Association (MOSSMA). The latter was shut down through a Cease and Desist Order issued by the Mines and Geo-Sciences Bureau (MGB) Region IX in April of 2012. In 2013, gold mining has been stopped, while logging operations has long been ceased and as of present not a single mining and logging firms are operational.

Elementary Education in the municipality is principally offered by the National Government through the Department of Education under Bayog School District. The municipality has 32 public elementary schools located in all 28 barangays. Sibuguey Valley Elementary School, a Seventh Day Adventist operated private school at barangay Poblacion likewise offers the same level of education.

Tertiary Education in the municipality is served by JH Cerilles State College Bayog External Studies Unit administered by the Local Government Unit. JHCSC Bayog ESU offers various courses such as Bachelor in Elementary Education (BEED), Bachelor in Secondary Education (BSED), Bachelor of Science in Information Technology (BSIT), Bachelor in Agricultural Technology (BAT), Associate in Information Technology (AIT), Diploma in Agricultural Technology (DAT), Curriculum for Certificate in Automotive Technology (CCAT) and Professional Education Course (PEC). The same college has produced competitive graduates over the years and has continuously raised the bar in terms of passers for the Licensure Examination for Teachers (LET). In fact, Mary Grace Magdula, BEED graduate made it to number 6 of the Licensure Examination for Teachers national level's Top Ten. About 33% of the passers every year occupy the regular teaching positions in the DepEd both elementary and high school. 80% of the locally-paid teachers in both elementary and high school are products of this ESU. 75% of the graduates from other departments have already landed jobs in and outside of the locality.

Pursuant to the implementation of Republic Act 7160 commonly known as the Local Government Code of 1991, welfare services in the municipality is now being implemented by the Local Government Unit. Civic organizations in the municipality play an active role in the relief and rehabilitation programs especially during emergencies. All these services and assistance given are designed to improve the living conditions of those who are economically, emotionally or socially distressed people in the community. (Source: CLUP 2014-2023 - Office of the MPDC)

The existing electric power in the municipality is supplied by Zamboanga del Sur Electric Cooperative II (ZAMSURECO II) through its substation in the Municipality of Buug, Zamboanga Sibugay. Presently, all 28 barangays has access to electricity.(Source: CLUP 2014-2023 - Office of the MPDC)

The Local Government Unit of Bayog has its level 3 Water System that supplies the need of the people in barangays Poblacion, Kahayagan and Salawagan. The types of water system used in the different barangays are classified as Level 1 (shallow well, deep well, and spring), Level 2 (spring development with communal faucets) and Level III (with individual houlsehold connection). The source of this Level 3 water for drinking is located at barangays Supon and Liba.(Source: CLUP 2014-2023 - Office of the MPDC)

Cell cites of giant telecommunication companies Smart and Globe were established at Barangay Kahayagan. The signal reaches majority of the barangays both lower and in the hinterland.(Source: CLUP 2014-2023 - Office of the MPDC)

There is one cable network operating in the municipality. It provides seventeen (17) channels. A Community e Center (CeC) is presently serving the people on internet and other ICT services. The CeC is owned and operated by the municipal government through the Office of the Muncipal Economic Enterprises Officer. Currently, there are three (3) computer service providers and 1 internet cafe' operating in the municipality.(Source: CLUP 2014-2023 - Office of the MPDC)

Every summer, the town becomes a venue of different religious gatherings, most prominent of them is the Regional Youth Camp hosted by the Liberty Bible Baptist Church that draws more or less 600 youths from all over the region and several participants from Cebu, Lanao del Norte, and Misamis Occidental. Another is the GAYEM, hosted by the Seventh-Day Adventist Church and holds participants from the Provinces of Zamboanga del Sur and Zamboanga Sibugay.

In terms of sports facilities, there are basketball courts, volleyball courts, and tennis courts available in town. On the other hand, recreational services are billiard hall, drinking parlors, video K, park and plaza.

Bayog also has a gymnasium with a seating capacity of 4500, considered as one of the largest in the province. Three other gymnasiums in town are also used in handling large crowds, the Kahayagan Gymnasium, BCES Gymnasium and the BNHS Gymnasium.